Easter Monday saw Read Theatre School pupils waking from their beds at the crack of dawn with a kick of nervous adrenalin and rushing to catch the coach departing Thatcham at 7am ready to deliver them to the world’s most famously dance theatre for a very special performance; where their dreams were about to come true.

Sadler’s Wells is the home of dance. The end. There is no other theatre in the world as important as this to the world of dance. And RTS pupils were about to make their London debut on it. In style.

Having rehearsed for months under the watchful eye of Evonnee Bentley Holder, who herself had spent the previous week dancing  at on the Sadler’s stage with the renowned NYDance Company debuting their new work, they were ready. 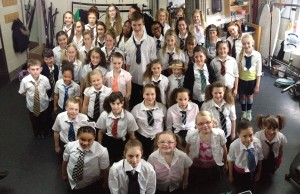 But what had brought them to this point? Hard work, determination, extra rehearsals, a commitment to practise at home and a desire to be the best they could and to work as a team. These skills aren’t just useful in he dance studio or on the stage – they are hugely valuable life skills.

We are incredibly proud of their achievement; as a school, as a group of young people working together and as individuals who all pushed themselves to really bring their personal uniqueness to the stage and then shared it with such joy and energy.